This academic year (2021-2022), college and university students across the nation returned, or made their initial move, to campus after a year and a half of remote learning. This brought great excitement after in-person learning and social lives had been put on pause to respect social distancing requirements and masking mandates related to the COVID-19 pandemic. Students were happy to see old friends, make new connections, engage in interactive learning, live independently and consider joining (or reuniting with members of) a fraternity or sorority.

The history of Greek life dates back to 1870 at the University of California (UC), the world’s leading public research university system, made up of ten campuses, nine of which offer undergraduate programs. UC Los Angeles (UCLA) is the largest UC campus in Southern California and it is home to a vibrant Greek system with 22 fraternities in the Inter-Fraternity Council (IFC) and 13 sororities in the Panhellenic Council, most of which have official housing for their respective chapters. In the 2019-2020 academic year, before the COVID-19 pandemic began, 13% of the undergraduate student body at UCLA was involved in Greek life.

During the 2020-2021 academic year, the entire UC system, including UCLA, operated virtually due to COVID-19. As such, Greek organizations hosted virtual recruitments for potential new members. Most IFC and Panhellenic Council chapters at UCLA created videos of house tours, general overviews of their philanthropies and values, and introductions to their brotherhoods/sisterhoods. Although recruitment took place, the process was starkly different than what was previously considered a ‘normal’ year. One result of virtual recruitment is that a bulk of current fraternity and sorority members – namely those who were admitted during the pandemic – joined Greek life without ever setting foot on campus or
meeting their Greek community in-person. Some of these students felt anxious about what their involvement would feel like after returning to campus. A more overarching sense related concerns is also present in the larger campus
community. Many students are worried about the evolving COVID-19 pandemic (e.g., the Delta and Omicron variants) and varying beliefs on vaccination and mask mandates, some folks are apprehensive about returning to social spaces
after many quiet months at home. Lastly, there is widespread concern about how colleges and universities will address campus-based sexual violence and sexual harassment.

Statistics suggest more than half of all sexual assaults among college students occur during the first term of the year, a period of time that has been dubbed “the red zone” for first year students because they are at substantially increased
risk for experiencing unwanted sexual encounters. 5, 6 In the fall of 2021, campuses across the United States (U.S.), including UCLA, welcomed not one, but two sets of new classes (i.e., freshmen and sophomores) to be living on campus
for the first time. Combined with returning juniors and seniors who missed a year of in-person education, it is unknown if or how students at UCLA (and across the U.S.) will behave after a prolonged period of limited social interaction and/or
to make up for lost time. Because of these circumstances, the first term of the current (2021-2022) academic year has been referred to as a “double red zone.” Worries surrounding the potential for exacerbated rates of sexual violence on
campus during this “double red zone” are amplified by the Trump Administration’s Title IX environment that persists in the current academic year, meaning that student survivors of violence retain diminished protections on their campuses.

We are seeking UCLA students who are 18 years or older and are involved in Greek Life to participate in a short survey,  a confidential interview, and, if willing, a focus group discussion.

PARTICIPATE IN THE STUDY

Or, copy and paste the URL below into your internet browser:

Once your eligibility is confirmed from the screening survey, you will be contacted to schedule an interview.

Upon attending the interview, you will receive a $10 UCLA Store gift card.

Your participation may help us to understand sexual violence in Greek life following students’ return after Covid-19 and generate ideas for tailored services to meet students’ needs.

This study is approved by the UCLA Office of the Human Research Protection Program. Your participation in this study will be used only for the purposes of this research. Your information will be kept confidential. 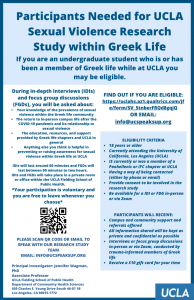 UC Speaks Up - Copyright 2019 | All Rights Reserved
Contact Us

We're not around right now. But you can send us an email and we'll get back to you, asap.